Research Interests and Projects in AERL

My research on this subject consists of localizing humans and classifying their activities using a Doppler and UWB radar. For this purpose, machine learning techniques, specifically an ANN and an SVM, to process the Doppler and UWB radar signal are employed. The phenomenon which makes human measurements unique is the presence of “micro-Dopplers.” Because a human is not a simple point scatterer but rather a complex target, it generates micro-Doppler returns from the arms and leg motions. Different activities of a human cause different micro-Doppler patterns in a spectrogram. Significant features can be extracted from the spectrogram and different human activities can be classified based on the features. The specific topics I am interested in include:

(2) Direction of Arrival (DOA) estimation using a sensor array – When the number of sensor elements is small, the spatial resolution of a radar is low using a traditional beam forming technique. An extended monopulse radar concept can be useful for the DOA estimation of multiple targets with high resolution. With the signature returns from several broad beams, an ANN is constructed to relate the signature and the DOA. With the help of an ANN, the DOA of humans can be estimated with higher resolution as compared to array beam forming when the number of sensor elements is small. The ANN was tested using measured data using a 4-element array radar.

(3) Classification of human activities - The phenomenon which makes human tracking unique is the presence of “micro-Dopplers.” Because a human is not a simple point scatterer but rather a complex target, it generates micro-Doppler returns from the arms and leg motions. Different activities of a human cause different micro-Doppler patterns in a spectrogram. Significant features can be extracted from the spectrogram and different human activities can be classified based on the features. I constructed a classifier based on the SVM to distinguish motions such as walking, running, crawling and punching. Data were collected from a number of subjects and the SVM was tested using measured data with excellent performance. 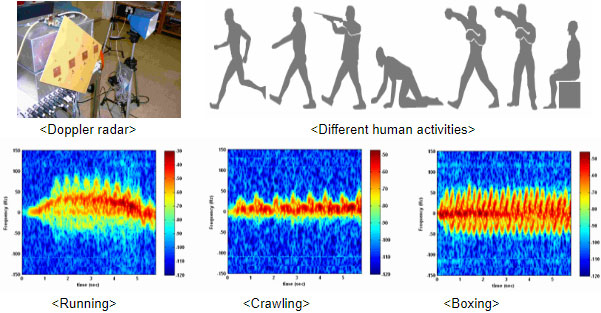 (4) Development of UWB simulator - For the analysis of human motion using UWB radar, a simulator that synthesizes humanreturns will be developed because measurements have many practical constraints. The humans are electromagnetically modeled as a combination of several ellipsoids and the returns are simulated as a superposition of each return when the human moves. The reflection coefficients and RCS of ellipsoid depending on frequency are implemented in the simulator.

(5) Ocean target classification - To monitor invaders through ocean in large area, a radar system can be effective. Ocean targets such as swimmers and small boats are measured and they are classified by a machine learning algorithm. For the extraction of Doppler features, the histogram of oriented gradients (HOG) will be utilized because I believed that HOG would be effective in recognizing a shape of microDopplers.

(6) Multiple target tracking - I willcontinue to study the multiple point scatterer tracking problem using a Doppler sensor network. This problem can not only solve multiple human tracking, but analyze the motion of each body parts of a single human if the resolution is improved. If this approach is successful, it could be applied to microwave imaging of moving objects. The linearization of Doppler equation will be necessary and I will try to solve the problem analytically and heuristically.

In the application of electromagnetics, vital signal detection is a field of importance. In the vital signal detection area, the first project I performed is the preliminary investigation between the total energy expenditure (TEE) and microDopplers. Based on measured data, the characteristics of microDopplers and TEE are related by the ANN. Secondly, a heart rate tracking using Doppler radar has been performed. Heart rate was measured and tracked via the reassigned joint time frequency analysis. Thirdly, I detected the human eye blinking using Doppler radar. Using the principal component analysis, the conscious and unconscious eye blinking have been classified.

(1) Estimation of total energy expenditure of a human– The accurate and consistent assessment of TEE of a human subject is important because adequate energy expenditure through physical activity can prevent many diseases. I suggest the use of Doppler radar to measure TEE of a person who exercises through walking and running activities. Because microDopplers contain information about movement of human body parts, TEE would be estimated through analyzing the amount and shape of microDoppler in spectrogram.

(2) Bone density estimation using inverse scattering – The application of inverse scattering problem in electromagnetic has been extensively addressed for the early breast cancer detection through estimating the electrical property of target inside. Because the current bone density measurements using X-ray is erroneous and still controversial on the reliability, I proposed to measure the bone density through the inverse scattering. The unique feature of this research problem is that it focused on determining the accurate electrical property of a certain area given approximate geometry rather than constructing the whole image based on the permittivity and conductivity. Algorithms such as Contrast Source Inversion (SCI) would be utilized for the 2-D data measured.

Recently I investigated the coupled-mode behavior of electrically small antennas. This research is motivated from the concept of Witricity suggested by Soljačić at MIT. When two small antennas are closely spaced in wavelength (d<0.08 lambda), their energy is efficiently transferred at resonance. The applications of this technique include RF-ID systems as well as wireless powering (charging) system for electronic appliances. Through the investigation of coupled mode behaviors using electrically small meander antennas, The power transfer efficiency is found to be a function of the frequency, the input impedance and the orientation. The antenna structure optimization is under study to maximize the strength of the near field to increase the power transfer efficiency.

The optimization of broadband antennas is a time consuming process because a computationally expensive EM simulator must be utilized. Several methods to reduce the time cost for the antenna optimization was researched.

(1) Model Based Parameter Estimation (MBPE) - For the fast calculation of input impedance of a broadband antenna, the MBPE is quite useful. The MBPE is incorporated into a genetic-algorithm optimization and the simulation time could be reduced.

(2) Adaptive Optimal Sampling - For reducing the sample points needed for the MBPE, an adaptive optimal sampling strategy was found to be effective. Optimal sampling based on the Fisher information theory can decrease the number of necessary sample points.

(3) Optimization by Artificial Neural Networks (ANN) - A frequency-domain parametric model is introduced to describe the antenna impedance. An ANN is proposed to predict the parameters of the model depending on the antenna geometry. By replacing the computationally expensive EM simulator by the ANN system, I showed that the antenna optimization process could be accelerated significantly. This approach can be used to the optimization of diverse parameters of an antenna including radiation pattern and gain, as well as input impedance. Different frequency models to improve the estimation accuracy is under study.

Finding the equivalent circuit model of a broadband antenna is not a trivial task. It can solve the mixed time/frequency problem in a Spice-like simulator. The key issue in circuit modeling is the enforcement of passivity to a rational function that describes the antenna behavior. Several methods I studied to ensure the passivity of the function included the modified Cauchy method, constraining passivity to the low model order functions, QP Programming, and optimal sampling using Particle Swarm Optimization (PSO). The equivalent circuit modeling of MIMO antennas is under study. For the exact simulation of a complete MIMO transceiver system including antennas, a multi-port system needs to be properly modeled as a circuit for the time/frequency domain simulator.

The health hazard of wireless signal (Electromagnetic Wave) has been a topic of controversy. To the public, it has been known that wireless signals would not cause severe diseases. However it is also not proven that it is safe to the long-term exposure. Recently, several studies warn the potential hazard of wireless device. The link between the use of cellular phone and brain tumors was found and several symptoms caused by the use of Wi-Fi were reported.

Excess exposures to wireless signals can be a disaster of this millennium. Especially, around 10% of population, so called an EMF(Electromagnetic Filed) sensitive, feel the wireless signals sensitively. They suffer from headaches, sleep disruptions, fatigues which caused by the wireless signals from cellular phone, Wi-Fi, Wi-Max, cordless home phone and Bluetooth head set. Even though many people say they don't feel it, it still affects a human body. It is found that the wireless signal has been scientifically linked to:

The problem of wireless signal is that it does propagate. If you use Wi-Fi at a public space, a person next to you is exposed to the signal naturally even though he does not use it. Until intensive studies verify the effects of wireless signals to human body and a regulatory organization makes a believable safety standard, the use of wireless device should be suspended in the public space such as school, airport, hotel and restaurants. Also, even for the personal use, the signal strength of the device should be decreased to reduce the second effects of it to others. Some related interesting articles or websites can be found in the following links.